Posted on May 27, 2012 by Librarians with Altitude

The winning artists next to their works. Photo by John Merriman, 2012.

It’s time for a recap of the ‘Live Live’ Youth Art Talent Portrait Competition held by the library this year. The artistic brief was for youths aged 15-21yrs to produce a portrait of a senior in their lives, along with the story behind the picture. The overall standard of work received for the ‘Live Life’ Portrait Competition was very high, so the judge had a difficult time choosing the winners – however, the final winners have been announced. So – congratulations, all!

At the Springwood Library award ceremony a couple of weeks ago, each winning artist was awarded their prize. Officially opened by Sarah Gurich (Exhibitions Manager at the Blue Mountains Cultural Centre), Aniko Koro (Team Leader for Children’s and Young Adult’s Services, Blue Mountains Library) and Naomi Oliver, Library Assistant and art tutor, the morning was attended by the artists, their friends and family, and Vicki Edmunds (Manager, Libraries & Community Services, Blue Mountains City Council). Thank you to John Merriman for these wonderful photos.

1st: Arabella Say
The judge said: Dementia is a challenging condition and particularly devastating when it affects someone close to you. Arabella has created a thoughtful and brave portrait of her grandmother and the ravages of age. 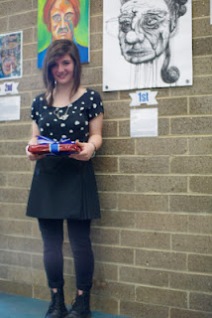 Arabella Say, with her winning artwork. Photo by John Merriman, 2012. 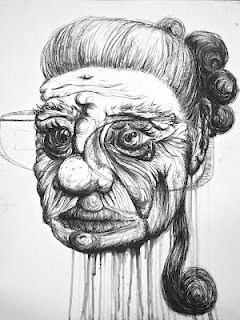 The winning entry, by Arabella Say, aged 17
Artwork Title: Angela (Nanny), 2012
Medium: lead pencil and charcoal drawing on A1 paper
Artist Statement: This artwork is based on my 85 year old Italian grandma (my Nanny), who is currently staying at a dementia facility. Less than 5 ft tall, she claims that the food at her nursing home is no match for her famous spaghetti. Her face is beautifully aged and she has a sweet button nose passed on to all her daughters who she speaks curiously of, in her forgetful state. It was a pleasure to draw such an experienced and elderly face and the dripping represents the inevitability and persistent evidence of aging and decrepitude.

2nd: Victoria Haynes
The judge said: Victoria has captured the character of her subject beautifully – Colin’s personality leaps from the canvas.

Victoria Haynes, aged 15
Artwork title: Vietnam Veteran
Medium: Acrylic paint
Artist Statement: The senior I chose is Colin Field, he is 67 years old and an active member in Warrimoo’s society. I chose him because he is a well known character in the area I live and because he has an interesting life history. He served in Vietnam during the war for a year as a Royal Australian Mechanical engineer. He has also served in the local RFS fire service since 1985 and was captain for five years. He was captain through the Warrimoo 2001 bushfires and shook hands with HRH Prince Andrew. He is a well known face in and around Warrimoo and Blaxland and is an all around good guy.

3rd: Darcy Bonett
The judge said: The title of Darcy’s work”My Grandma’s Eyes” says it all. This photograph expresses the joy and pain experienced in a long life, but most of all it expresses the love of a grandmother for her grandchild. 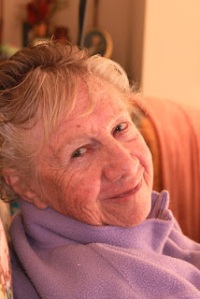 Darcy Bonett, aged 15
Artwork Title: My Grandma’s Eyes
Medium: Photograph
Artist Statement: My grandma has not had the easiest life. Just like so many others her age, she has lived through many losses and seen many awful things.
Sometimes you can see the pain in her eyes, but usually she hides it all away behind the love, and the hope and her dreams…

Lindsay Harper, aged 15, was awarded the ‘Highly Commended’ prize
Artwork title: Timm Murany
Medium: Acrylic on canvas
Artist Statement: My portrait is of a local artist from the Blue Mountains – Timm Murany. Timm Murany started drawing and painting when he was 10 years old. He grew up in central Europe, Czechoslovakia, and emigrated to Australia in 1971. Shortly after, he purchased a block of land in the Blue Mountains because of it beauty and freedom. He was and is inspired by the ever changing colours of the bush caused by the fogs and distant mists. He paints vivid, colourful oil paintings and teaches art students in his Blue Mountains art studio the craft of the art. I have been a student of his for 4 – 5 years now, and he has been helping me develop my own work. 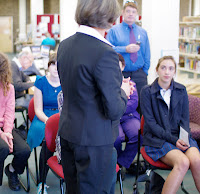 Aniko Koro speaks about the project. Photo by John Merriman, 2012. 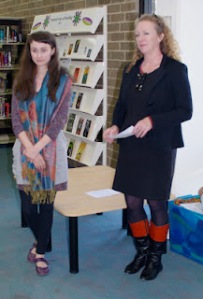 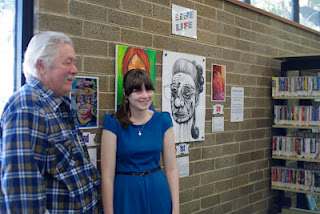 Colin Field and Victoria stand next to her portrait of Colin. Photo by John Merriman, 2012.