Posted on August 14, 2014 by Librarians with Altitude

The winners of the 2014 awards will be announced at the Brisbane Writers Festival on Saturday September 6.

Chair of the ACWA, Michael Robotham, said of the 2014 shortlist, “I can’t remember a time when the competition was so fierce and the quality so high. Nordic crime has been huge around the world since the Stieg Larsson trilogy but I think Australia can become the next great hotbed of crime writing.”

One Boy Missing by Stephen Orr

The Dying Beach by Angela Savage

Every Breath by Ellie Marney

Disgraced? The Cop at the Centre of Melbourne’s Gangland Wars by Paul Dale

Murder in Mississippi by John Safran 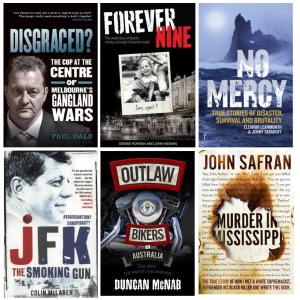 The Scars of Noir by Darcy-Lee Tindale

Voices of SOI 22 by Roger Vickery

Splinter and Web Design both by Emma Vickic

The full list of shortlisted nominees is now published at: http://www.austcrimewriters.com/content/2014-ned-kelly-awards